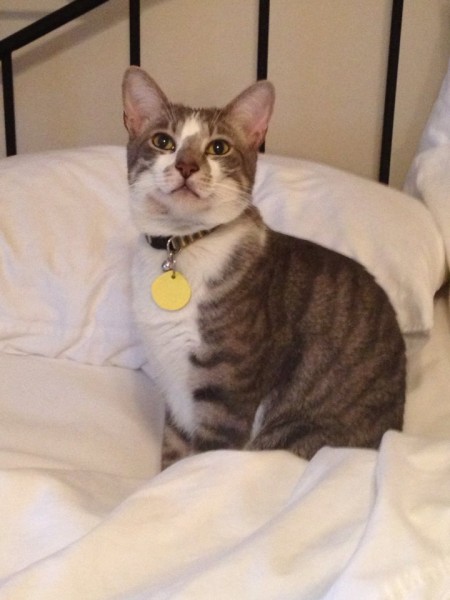 I can’t believe that it has been 4 years since I adopted Haley and Boogie from Town Cats. We always had cats growing up but when you rent an apartment it is hard to find a place that accepts pets. Fortunately I have a pet friendly landlady who told me that I could get whatever pet I wanted as long as she could bring her kids by to play with my new companion. I couldn’t wait to adopt. When I went to check out the kitties at the adoption event, I couldn’t decide what I wanted by my friend’s daughter was with me and she spotted a silver/gray kitty off to the side and said that I should get that one. Sure enough…she was spot on and after playing with this little girl kitten I brought her home to be MY kitty.

A few months later I realized that I needed another cat so that Haley had someone to hang out with when I was at work so I did some research on the Town Cats Website and saw a really cute kitten named Boogie. I was interested in him for 2 reasons: 1) he was adorable and 2) we had a cat named Boogie growing up and I KNEW I wanted him. I was all set to make an appointment with Town Cats to see him when I happened to see him at an adoption event near my home when I stopped by to get cat food. I was on my way to a friend’s house and thought that if he was still available when I stopped by later then I would take him home with me. Sure enough, when I went back to the pet store several hours later they had just told someone that they couldn’t adopt him because they wanted to make him an outdoor kitty. I inquired about him and one of the women working the event remembered that I was Haley’s mom and she immediately told me that I could take him home if I wanted to. Now he’s a permanent part of the family. 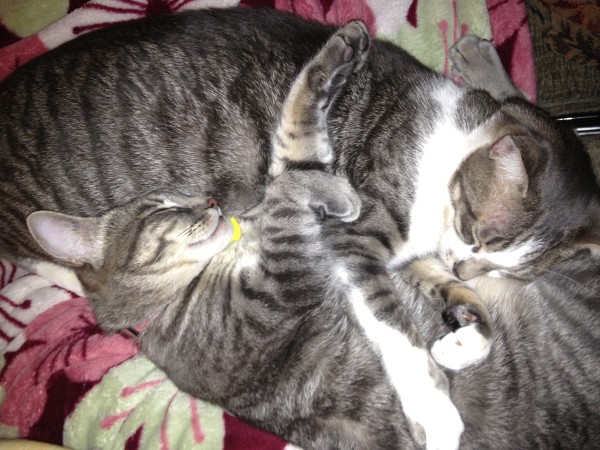 I love that Town Cats takes such good care to find the right home for each kitty they adopt out. I think we are all a good match for each other. Haley and Boogie regularly sleep with one another during the day and they sleep with me at night. They follow me around and I joke that they are my security detail. My life is full of cuddles, cat toys and kitty antics.   I couldn’t be happier.