Harvey came to Town Cats in October of 2019 when his owner contacted us because she could no longer keep him due to a sick family member. She had inquired through Animal Control, though they had recommended that they turn to us because they were unable to accept Harvey into their adoption program. Harvey was only 6 years old, but he did have a common behavioral issue: loud, frequent meowing due to underlying anxiety. He couldn’t be returned to the shelter that he was originally adopted from because he actually came another country, Bangalore, India. His owner had plenty of sweet, thoughtful things to say about him, but he just didn’t show well to new people. He was playful and outgoing in her care, but he lost that confidence when new people would come around. For a cat, rehoming can lead to a lot of fear, anxiety, and stress. He did well upon first exam but had clearly shown signs of distress once he had been at our shelter for a few days. It’s scary going from a home that you’ve been in for years with a family that you’ve come to know to new surroundings with new people.

We added Harvey into our Cat Pawsitive clicker training program in hopes that it would help him gain confidence. One of our volunteers, Laura, devoted much of her time to coming in and working solely with Harvey. She would sit with him in his room and coax him out with treats; it took a lot of patience, but eventually, he began to warm up and would even come out to sit on her lap! After a few weeks of continued progress, Harvey would even greet visitors by his window! This January, a couple came into the shelter who had recently lost their cat. They were ready to bring a new cat into their home, and they specifically wanted to adopt a cat who was having difficulty finding a home. Harvey had surprisingly rubbed right up on their legs when they had come into meet him! He wasn’t hiding like he did with most visitors. Hearing his story also inspired the couple that he was the right cat for them! After spending some time interacting with him, they decided to welcome him into their home. It took some time, but he’s warming up nicely to his new home and his new family! 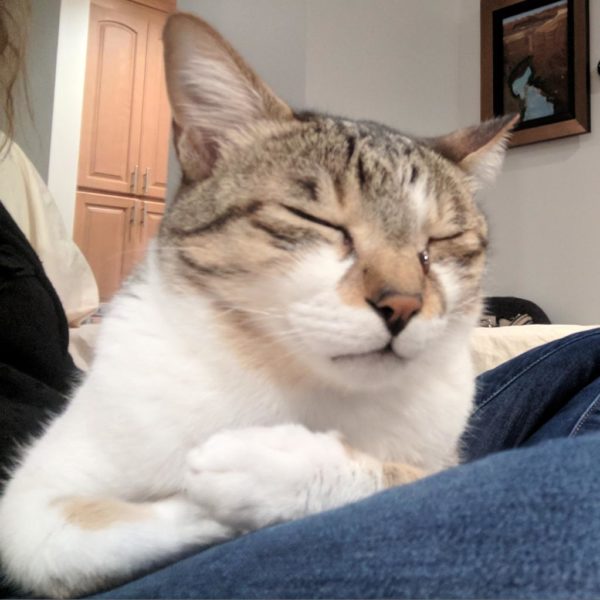