Ringworm is not actually a worm; it is a fungal disease. It is caused by 3 different species of fungus and can infect any mammal. Cats are commonly infected and the disease can be spread to humans. It is predominantly a skin disease and in humans it appears as a red ring of flaky, itchy skin (hence the name ringworm). In cats, it look like any type of bald spot. Most commonly, cats get it on their face, head, all paws and tail. Young cats are more susceptible but it is also seen in adult cats. Being a fungal disease, it is spread by spores in the air so wherever an infected cat is, the disease is and can be spread. One species of the fungus (Microsporum canis) will glow under a special light (Wood’s lamp) but only half of the time. A fungal culture is considered the gold standard for diagnosis and determination of a cure.

Treatment consists of oral anti-fungal medications and once to twice weekly dipping in either Lyme sulfur shampoo or hydrogen peroxide shampoo. The bald spots may disappear but the cat will still be contagious; a cure is defined as having 2-3 negative fungal cultures in a row. “Natural” treatments such as apple cider vinegar, coconut oil, tea tree oil, papaya, garlic, grapefruit seed extract, colloidal silver, betadine, and topical bleach are not effective and some of these home remedies are toxic to pets. If your cat has ringworm, it can be treated but it can take months. Besides treating the cat, the environment the cat is in also has to be disinfected; this can be troublesome if cloth covered furniture is in the environment. People who are immune-compromised (HIV, Cancer with chemotherapy) are especially at risk to get ringworm. These people should not be around ringworm cats. If you suspect your cat has ringworm, be sure to check with your vet. 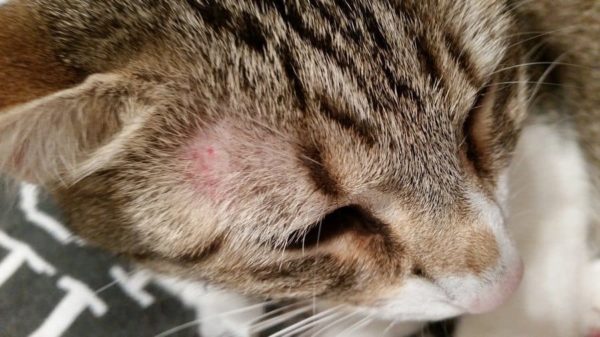