Our goal is to raise $25K for our Foster & Kitten Programs Campaign, to help save as many kittens and cats this year as possible. We will have a Virtual Event on May 15 from 2-4pm, and an online auction from May 15-31. Attend the event and hear from two exciting speakers, Samantha Bell (Cat Advisor to the Stars and Jackson Galaxy Cat Pawsitive Mentor/Trainer) and Patty Guthrie (Therapy Cat Expert).

Help us save more lives this kitten season by supporting our “Cause for Paws”  Online Auction and Event! Our auction is now live and runs until  May 31st. Our virtual event took place on May 15th, read below for a recap of the event.

On Saturday May 15th, Town Cats held its “Cause for Paws” Spring Virtual Event and it went off without a hitch!

Our attendees were graced with the presence of special guest speaker Samantha Bell (and briefly, her cat Wanda, until she got booted out for being too cute). Samantha has over 20 years of cat rescue experience, including several years as a cat behavior consultant where she tag-teams with Jackson Galaxy, who she joked sometimes doesn’t have all the answers. “He got the TV show but he does come to me for help!”

With her sunny disposition and charming video examples, Samantha taught us the value in understanding cat body language and how it can save lives. “In everything they do, [cats] are communicating with us. We just need to learn what they’re saying.” She explained what cats are expressing through the position of their ears, whiskers, tails, etc. – except in the case of her cat Desmond, who curls his tail like a monkey! In this instance it doesn’t mean anything except that he’s an “adorable weirdo.” Samantha also provided clear instructions backed up by science on what to do and what not to do when cats are in certain moods, and how to prevent overstimulation.

After Samantha’s Q&A, Town Cats volunteer, Victor, gave a short tour of our shelter’s Side A room and introduced some of the kitties that are available for adoption right now! Most of them were having a “nice afternoon siesta” but Batley was feeling playful and feisty. Victor gave him and a few others who were awake some chin scratches and lovingly complimented each cat’s coat and colors. Victor has been with Town Cats for a year and a half and his soothing demeanor has made him very popular among our Facebook Live fans. 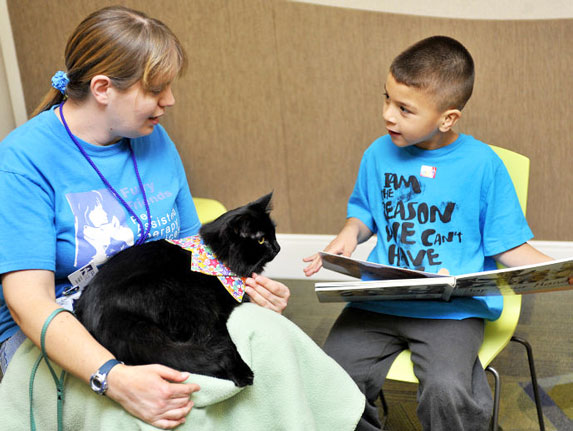 The second guest presentation was hosted by the always delightful duo of Patty Guthrie and Dave Zemke, who have been dedicated volunteers with Town Cats for almost 20 years! They were joined by their cats Widget and Mokey, who are normally pushed around in strollers for their day jobs as therapy cats, but were quite content to purr lazily in Patty and Dave’s laps.

Patty noted the important distinction between a therapy animal, an emotional support animal, and a service animal. She also gave us a deeper look into the training process for therapy cats, and which traits she considers when she’s looking for a new furry coworker. Patty and Dave need an animal who is “unflappable.” As an example, she clapped suddenly and loudly and neither Widget nor Mokey were startled, except their less-than-impressed expressions which clearly said, in Patty’s words: “Gosh, you’re noisy!”

Patty also shared a couple of interactions that particularly touched her, including a story about a therapy cat visit to a mostly non-responsive woman in hospice. Mokey plopped down the on bed and started purring up a storm and making biscuits, which is something he never did and hasn’t done since. The woman unfortunately passed a few weeks later, but Patty believes “[therapy cats] do pick up, to some extent, who really needs them.”

All in all, the “Cause for Paws” Spring Virtual Event was a success! Thank you to all who attended, and a very special thank you to our guest speakers, Samantha Bell and Patty Guthrie, as well as our volunteers who worked hard on this event behind the scenes.  If you missed the live stream, don’t worry! We’ve got a recording available which will be posted here soon. Plus, Town Cats has plenty of other fun upcoming events planned throughout the year!

Want to travel somewhere? Our auction features 200,000 United Miles that you can use to travel anywhere in the World!

The Ultimate Broadway Experience – two tickets to a Broadway show of your choice, Pre show dinner with a cast member, and Post show meet & greet in the Theater.

Have a professional chef cater your next dinner party!

Meet Professional Soccer Legend Chris Wondolowski – have a private dinner with him, or have him put on a 1/1 or larger group soccer training session for your team/group!

Own this gorgeous painting by Beth Overholt

MAKE A DIFFERENCE AND GIVE TODAY!