Have you ever been caught in an impossible situation on your own with no hope in sight?

Meet Casey Jones. He was in great pain. Cold. Starving.

We know that Casey once had a home and people who loved him but he was lost and alone. He could not find his way back home. He was on his own trying to make it on the hard streets of San Jose but he was not doing too well. He was struggling to survive. He was slowly dying.

Casey was a full-grown, adult, male cat, a Flame Point Siamese with beautiful, blue eyes and a glorious plume of a tail, but he was now painfully thin, weighing just 4.75 pounds, and he had a badly broken leg which dragged behind him. The last couple inches of his tail had been severely injured and it was necrotic, rotting. He had two, deep puncture bite wounds that were infected and oozing pus. It was cold and he was so very hungry and thirsty. Things were looking grim. He was in deep trouble.

Three teenage girls were out together walking on their high school campus when they discovered Casey curled up in a small ball under a bush, with his beautiful, fluffy tail wrapped tightly around his battered body; he looked like a small fox. He was trying to keep warm, trying to find safety in an overwhelming, painful world. He looked back at the girls from over his tail with wary, defeated eyes. He did not even lift up his head. The kindhearted girls felt so sorry for the cat. They knew what to do! Get help! They had a favorite teacher and coach who they trusted and they knew he was a cat lover. He would know what to do. 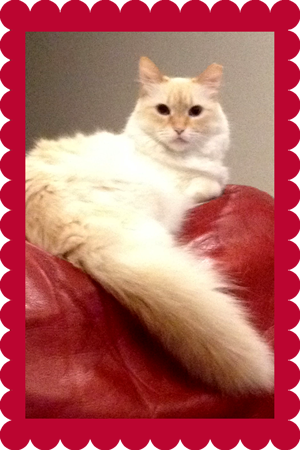 The young women led Coach Chris to where Casey was hiding on the grounds of Gunderson High School. Chris spoke soothingly and moved ever-so-slowly; he got down on his hands and knees and climbed in to reach the small, scared cat. Chris pulled Casey gently into his arms.

Coach Chris drove the badly injured cat to the emergency vet hospital but they were closed. Then Chris went to his second choice, a nearby veterinarian hospital, and he asked them to help the cat.

The sad, practical truth of the matter is that a homeless cat in Casey’s medical condition would most likely be humanely euthanized. Casey was older — an estimated 10 to 13-years-old. Casey was emaciated and badly hurt. It would take hundreds of dollars and months of rehab to repair him. There could be underlying conditions. Who would take that on for one homeless, old cat in trouble?

Luckily, the vet hospital that Coach Chris chose is a vet hospital that works closely with us at Town Cats. Casey was a sweet cat in pathetic shape. We got the call and made the tough decision: If not us, then who would help this boy? He was not disposable.

And that is when we at Town Cats changed Casey’s future. He was a homeless cat in life-threatening trouble and we gave him a second chance at life and love. We took his pain away. His rear leg was beyond repair so his leg and the necrotic end of his tail were amputated. His abscessed, bite wounds were cleaned, his teeth were cleaned, and he was put on pain meds and daily antibiotics.

He spent months in a quiet foster home, recovering from his wounds, doubling his weight and learning to trust again. The day he triumphantly climbed the tallest cat tree in the house on his three remaining legs, his foster mom cried with joy. His foster mom dared to dream of an indoor-only home where he would be cherished, where he could bathe in sunbeams from a windowsill, safe from harm, free of stress, and live out his days as a beloved member of a family — hungry for food and affection no more.

Meet Lisa and Dave: A story of true love

Lisa and Dave were searching for a pair of rescued, female cats to add to their family. They were imagining a bonded pair of young, adult, female cats, sisters, maybe one or two-years-old, when they went to a Town Cats’ adoption fair. That is where they met Casey Jones.

At the fair, Lisa was immediately drawn to Casey, to his beautiful face, to his soulful eyes. She reached out her arms for Casey and sat right down on the floor, holding him on her lap, listening to the story of his suffering. She curled her body around him forming a tight, protective shield, a small universe of just two and the world stood still. Lisa wrapped him in her warmth and in her coat. Lisa felt his despair, his pain, and she wept. Her tears fell from her eyes to his soft fur. She could visualize all that he went through and in that moment, she fell in love, deeply and truly in love. Lisa and Dave vowed then and there to give him the perfect home and be his guardian angels, protecting him for all the rest of his days. He was part of their family now. He had a home. A family. It was true love.

It took all of us — a village of kindhearted, everyday heroes to save Casey’s life.

Here is Casey, healthy and triumphant in his forever home.

Help us save more cats and kittens by making a gift to Town Cats today!