In late 2017, we had taken in a group of cats rescued from a hoarding situation that left them malnourished, ill, and in need of socialization and care. They eventually recovered and blossomed into lovely and friendly cats, although some were left with lasting chronic health issues due to their exposure to hoarding and neglect. Adopter Sanhita Datta adopted two of those cats- Milky (formerly Mario) and Sheena in 2018. She gave us a wonderful update of their life since being adopted:

“They are very happy.  Milky does not have his upper canines (the vet could not tell us why) we found that out soon after we got him.  Sheena of course has many lung issues.  So we have kept them indoors. Sheena needed a lot of medical attention for her teeth.  She also periodically gets respiratory tract infections.  So far she has responded well to antibiotics. The doctor said that will always be there.  She really enjoys her almost daily nebulizer  treatments.

They play and they sometimes fight.  Milky is easily spooked. Sheena is rarely afraid of anything, talks back and has quite an attitude at times.  We have a crinkly tunnel that Sheena loves to dive into and play this “grab your finger and tunnel diving” game.  Before Covid, she would go for small walks around the neighborhood on a leash and “chat” with folks on the street.  That is however not Milky’s thing.

They both like to sneak into the bathroom and lick the shower floor and you can totally tell they know they are not supposed to do that. They have brought us so much pure joy.”
Sanhita 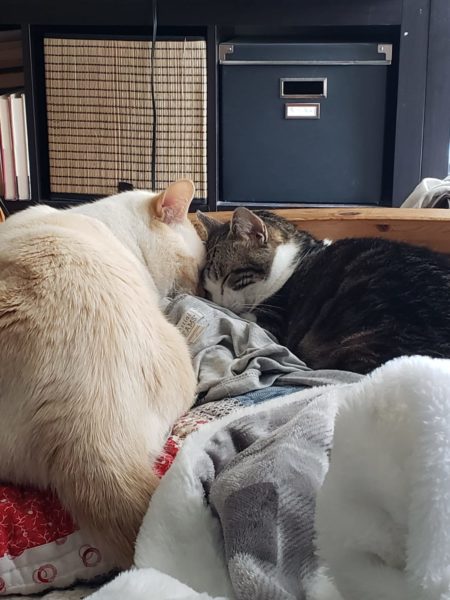